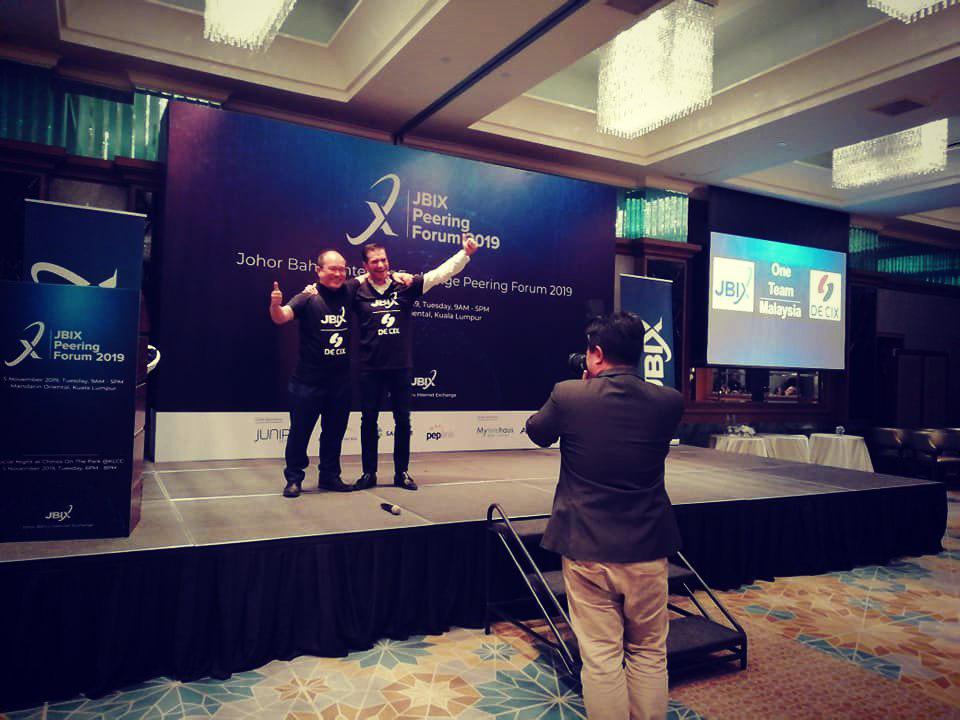 Frankfurt am Main (Germany), Kuala Lumpur (Malaysia), 6 November 2019. The world’s leading Internet Exchange (IX) operator DE-CIX is taking its global interconnection success model to the next level and will be entering South East Asia. DE-CIX and the local Malaysian Internet Exchange provider JBIX are announcing their partnership and will run together two Internet Exchanges in the greater Kuala Lumpur and the Johor Bahru region – with more to come on the Malaysian peninsula. DE-CIX is therefore expanding its interconnection equator to its most eastern point to date. In addition to offering the advantage of local IXs in these markets, DE-CIX will also introduce a shared interconnection fabric where participants of both Exchanges will be able to interconnect. DE-CIX will also make its award-winning DE-CIX Apollon interconnection solutions available to all locations, allowing the provisioning of different
interconnection services like peering and cloud exchange.

“After successfully establishing leading IXs in Europe, North America, India, and the Middle East, DE-CIX is now taking its almost 25 years of experience to South East Asia. DE-CIX has a proven record of accomplishment in successfully creating interconnection hubs worldwide, in regions where customers are in need of easy-to-access interconnection services. While Singapore has been a major content hub for the region for the last decade, the key content and cloud-computing players have started to extend their footprint throughout ASEAN – including in Malaysia,” says Ivo Ivanov, CEO of DE-CIX International.

As a result of the new joint venture in between DE-CIX and Starwing Technologies Sdn. Bhd. group, the new company is to be called DE-CIX Malaysia and will be headquartered in the country’s capital city of Kuala Lumpur. The new joint venture company “DE-CIX Malaysia” will collectively take over the Johor Bahru Internet Exchange (JBIX), which is the second IX in Malaysia. JBIX is an open and carrier class IX run by a team of certified network experts and has been operational since 2018. As of today, JBIX serves close to 50 regional networks.

“Since its launch one year ago, JBIX has received tremendous support from local, regional and global networks. Their support has not only helped JBIX to become one of the fastest growing IXs in the region, it has also underlined the strategic advantages JBIX has to offer to itsparticipants. Our partnership with DE-CIX will help to accelerate the development of connectivity hubs in the country, which is an exercise that synergizes with the Malaysian Government’s initiative in promoting 5G, IoT and digital businesses,” Weng Yew Wong, Managing Director of JBIX.

“Beyond establishing the world’s leading IX in Frankfurt (Germany), DE-CIX’s international expansion is unrivaled. DE-CIX has created the leading neutral IX on the North American East Coast with DE-CIX New York; the fastest growing IX on the planet since its inception in 2016 with DE-CIX Madrid; and most successfully entered the Indian market in 2018, establishing interconnection hubs in Mumbai, Chennai, Kolkata and Delhi. Now it’s time for South East Asia,” Ivanov closes.

Welcoming the announcement, Surina Shukri, MDEC’s Chief Executive Officer commented: “Over the past two decades, the world has witnessed revolutionary changes in how consumers and businesses connect through technology. This latest initiative is aligned to Malaysia’s goal to become a regional digital powerhouse in the era of the Fourth IR and ensure the digital economy will drive shared prosperity for all. “

DE-CIX currently operates IXs in 18 metropolitan regions around the globe (excluding Malaysia). DE-CIX in Frankfurt is the world’s leading IX with a peak traffic of more than 7.5 terabits per second (Tbps) and more than 900 connected networks. At the individual locations, Internet service providers, network operators, content delivery networks, and enterprises exchange data traffic on a cost-neutral basis through so-called “peering”, so that the data packets get to the recipient via the fastest and most inexpensive path.

About DE-CIX
DE-CIX is the world’s leading Internet Exchange operator. Having started operations in 1995, DE-CIX in Frankfurt am Main is the Internet Exchange (IX) with the world’s highest data throughput at peak times, at more than 7.5 Terabits per second (Tbps). Its technical infrastructure has a total capacity of 48 Terabits.

In total, DE-CIX serves over 1700 network operators, Internet service providers (ISPs), and content providers from more than 100 countries with peering and interconnection services at its 18 locations (excluding Malaysia) in Europe, the Middle East, India, and North America. Further information at www.de-cix.net

We built the JBIX to serve the Internet community in the region. The business plan is based on cost recovery model, meaning the port charges is maintained at the lowest price possible to attract more users. As more networks join JBIX, the port charges will be revised to bring saving to all the users.